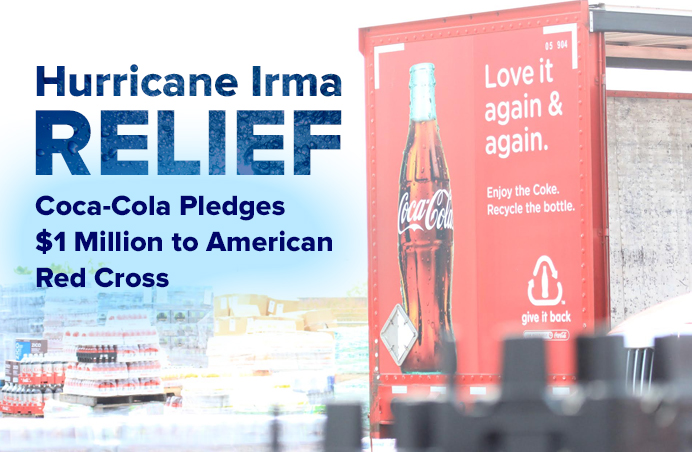 The southeastern U.S. and the Caribbean

More than 1.3 Million Bottles of Water and Other Beverages Donated So Far to Support Relief Organizations Responding to Hurricanes Harvey and Irma

ATLANTA, Sept. 13, 2017 – The philanthropic arm of The Coca-Cola Company – The Coca-Cola Foundation – today pledged $1 million to the American Red Cross to support local relief efforts related to Hurricane Irma. These funds will help provide immediate resources for necessary food and shelter and will aid in long-term rebuilding efforts in the Southeastern United States, Puerto Rico, and the U.S. Virgin Islands. This donation builds on the $1 million the Foundation granted for Hurricane Harvey relief efforts in August.

The Coca-Cola Company and its local bottlers also continue making product donations to support communities impacted by the devastating storms in the Southeastern United States and the Caribbean.

The Coca-Cola system, including Coca-Cola Beverages Florida, Coca-Cola Puerto Rico Bottlers and Coca-Cola North America, have donated nearly 200,000 bottles of water, juice, sports drinks and other beverages to people affected by Hurricane Irma so far, with more expected in the coming days. This adds to the more than 1.1 million drinks distributed to the American Red Cross and other relief organizations helping people impacted by Hurricane Harvey last month.

“Because of the Coca-Cola system’s local footprint in communities across the country, we are usually in a unique position to help in times of disaster. As we saw just a few weeks ago along the Gulf Coast, it’s critical that businesses and people do what they can to come together and support each other,” said Sandy Douglas, Executive Vice President and President, Coca-Cola North America; and Board Member of The Coca-Cola Foundation. “We’re mobilizing with our local bottlers to donate beverages and funds to support the good work being done by authorities and relief agencies.”

The company is matching employee contributions made to the Coca-Cola Employee Disaster Relief Fund up to $100,000. Proceeds will go to help Coca-Cola system associates who are impacted by the storms.

In the storm’s aftermath, the Coca-Cola system continues to evaluate how it can help the impacted states of Georgia, South Carolina, Alabama and Tennessee. In Georgia, Coca-Cola and its bottling partners Coca-Cola UNITED and Coca-Cola Consolidated have been delivering as many beverages as possible to serve customers before and after the storm.

Coca-Cola is also giving consumers opportunities to support the American Red Cross in their relief efforts during the aftermath of Hurricanes Harvey and Irma. People can visit Coke.com/give and enter codes found under the caps of Coca-Cola beverages – and inside multi-packs – and convert them into donations to the American Red Cross.

CC1 Companies, better known as Coca-Cola Puerto Rico Bottlers (CCPRB), is the largest beverage distribution and manufacturing company in Puerto Rico. Since 1995, the company has been diversifying its portfolio of Coca-Cola products and other beverages, in order to innovate and satisfy consumer demand. The company sources its plastic bottles, aluminum cans and other raw materials locally and owns and manages the largest vending operation on the island. CCPRB and has supported economic development in Puerto Rico through the creation of thousands of local jobs over the past 20 years. CC1 has further expanded its footprint in the Caribbean with CC1 St. Martin, Caribbean Bottlers Trinidad & Tobago, LTD and KOSCAB, which has become the main distributor for Coca-Cola Products in Trinidad and Tobago, Anguilla, St. Bart’s, St. Kitts, Nevis, Antigua, St. Vincent, Grenadines Islands and Granada. What began in 1995 with nearly 300 direct jobs, is now the largest beverage manufacturing and distribution operation in Puerto Rico and the lesser Antilles, which currently generates about 2,000 direct jobs and thousands of indirect jobs. For more information visit www.ccprb.com

Coca-Cola Florida, headquartered in Tampa, is one of the largest privately held, independent Coca-Cola bottlers in the United States. The company employs over 4,500 associates and serves customers, consumers and communities of the Sunshine State across various markets in North, Central and South Florida. As the local steward of the world’s most complete non-alcoholic ready-to-drink portfolio of consumer-centric beverages and brands, including over 600 unique products and twenty billion-dollar brands, Coca-Cola Florida is fully committed to delivering mutually beneficial value propositions to its local partners and being an integral part of every community it serves. For more information, visit www.cocacolaflorida.com.

About The Coca-Cola Foundation

About The Coca-Cola Company

The Coca-Cola Company (NYSE: KO) is the world’s largest total beverage company, offering over 500 brands to people in more than 200 countries. Of our 21 billion-dollar brands, 19 are available in lower- and no-sugar options to help people everywhere more easily control added sugar. In addition to our namesake Coca-Cola drinks, some of our household names around the world include: Ades soy-based beverages, Ayataka green tea, Dasani waters, Del Valle juices and nectars, Fanta, Georgia coffee, Gold Peak teas and coffees, Honest Tea, Minute Maid juices, Powerade sports drinks, Simply juices, SmartWater, Sprite, Vitaminwater, and Zico coconut water. At Coca-Cola, we’re serious about making positive contributions to our world. That starts with reducing sugar in our drinks and bringing new and different drinks to people everywhere. It also means continuously working to reduce our environmental impact, creating rewarding careers for our associates, and bringing economic opportunity wherever we operate. In fact, together with our bottling partners, we employ more than 700,000 people around the world. For more information, visit our digital magazine Coca-Cola Journey at www.coca-colacompany.com and follow The Coca-Cola Company on Twitter, Instagram, Facebook and LinkedIn.